Specialist cycling insurer Bikmo has unveiled new data from the Police which shows reported bike thefts as significantly down from 2020 to 2021. This comes as they update their innovative bike theft tracking map for public use. Available to all for free, riders across the country can now view reported thefts for 2021 on an interactive heatmap – enabling riders to identify and avoid hotspots.

This drop in reported theft is part of an emerging pattern, with rates decreasing year-on-year for the past 5 years. A number of factors may be responsible for this latest drop, including changing habits due the pandemic with less people commuting into towns and cities. It could also be that many people don’t believe the Police will actually investigate and so attempt to retrieve their stolen bike using social media instead. 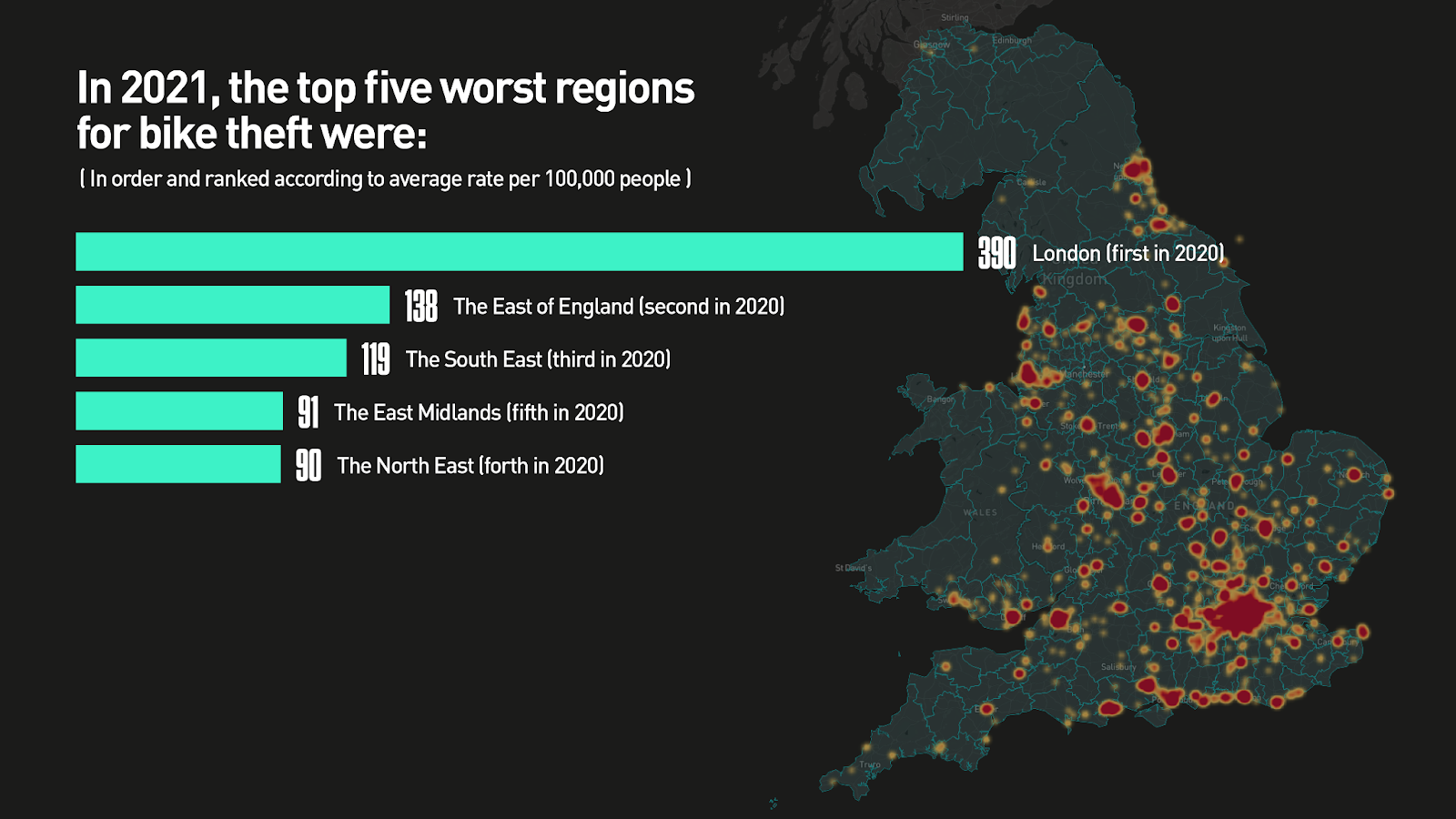 In 2021 the worst location for bike theft in terms of raw numbers was Tower Hamlets, with 1,784 bike thefts, closely followed by Hackney with 1,621 and Cambridge with 1,565.

Across England and Wales there were a total of 67,116 reported bike thefts, down from 74,573 in 2020. This comes despite high profile spates of bike theft, including the specific targeting of Brompton bikes in April of this year.

The safest region when it comes to bike theft, according to the publicly available police data, was the North West – with a rate of just 52 per 100,000 people. Although this is likely due to an ongoing problem with reporting in the region, after Greater Manchester were previously found to have failed to report 80,000 crimes. 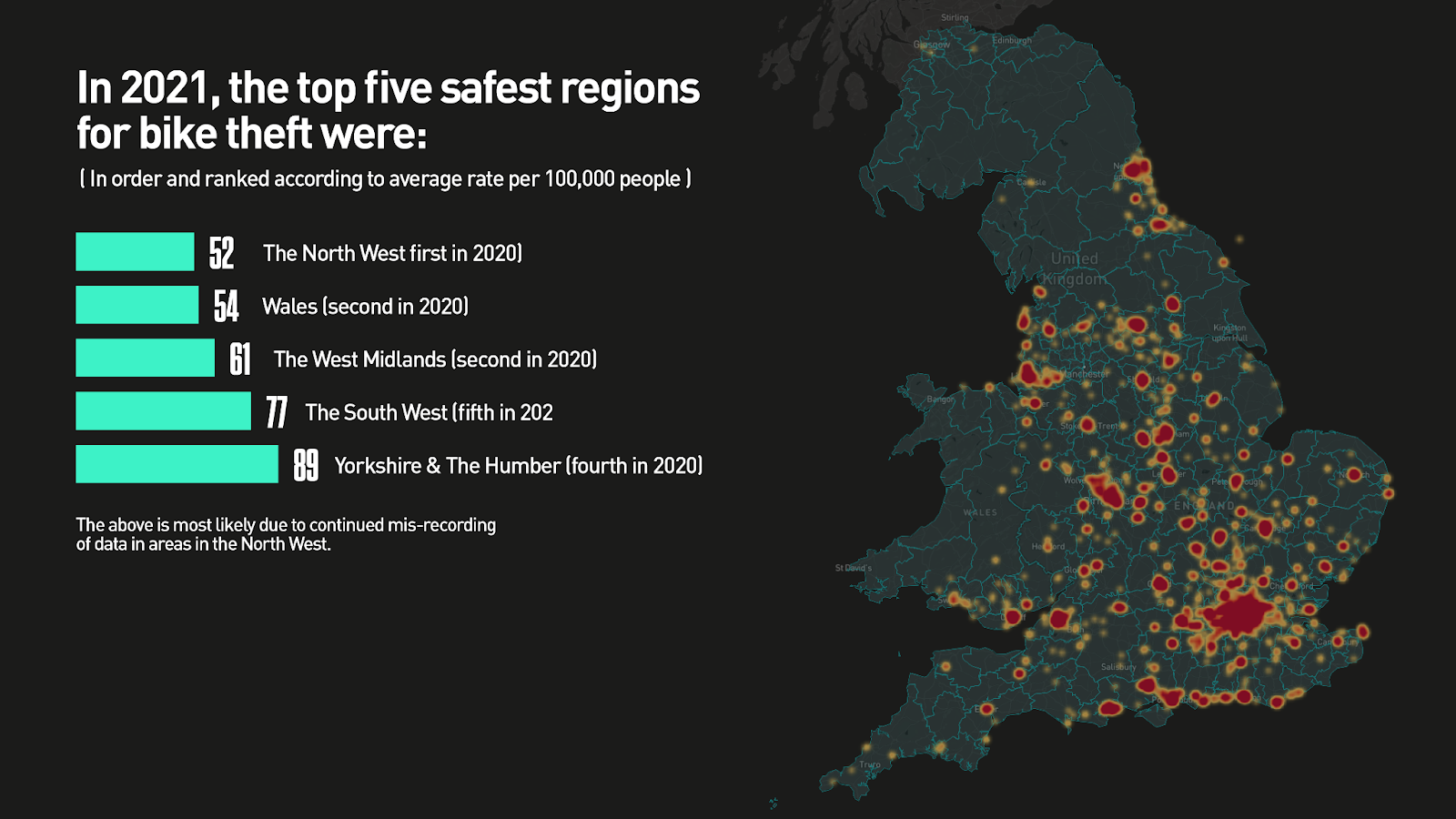 Within the data from the police, there are some missing values for certain areas and some amounts which appear to be outliers. There are a number of examples of this, implying that perhaps in some areas bike theft is not being taken seriously enough.

One of the key barriers to increased uptake of cycling is concerns around having a bike stolen. If we are to reach the Government’s ambitious target of half of all journeys in towns and cities being walked or cycled by 2030, it is clear that more action is needed to combat bike theft.

‘’In our mission at Bikmo to protect the world’s cyclists, we’re focussed on being proactive – not only putting riders back on a bike when their is stolen but educating our customers and community about the risks in their area and what they can do to reduce them so they can continue enjoy their ride.

‘’The Bike Theft Map is a key part of that mission and after seeing how popular the 2021 map was with customers, riders across the UK, and the Police Force alike, I’m proud that we’re continuing to invest in a great tool to support riders across the UK.”

‘’It is promising to see cycle crime reducing despite the huge uptake in bike sales over the last 2 years. With the launch of the national double lock it campaign to encourage bicycle owners to secure and register their bikes both at home and away and more cycle crime reduction partnerships being implemented in towns and cities across the UK to tackle crime, it is all contributing towards supporting our cycling communities.

‘’Of course there are still cycle crime hotspots that we’re focussing our attention on and we are working with organisations such as Gumtree and the Bicycle Association to disrupt organised crime.’’

‘’It’s good to see a reduction in reported bike thefts, but it remains a significant issue for cyclists and bike retailers alike. As an industry we are working with our members and UK Police to identify ways to help tackle the problem.’’

About alastair walker 8976 Articles
20 years experience as a journalist and magazine editor. I'm your contact for press releases, events, news and commercial opportunities at Insurance-Edge.Net
Twitter

It’s been noted by many that electric car ownership is mainly a middle class hobby. Those who live in flats or terraced houses have nowhere to plug-in their cars, so they socially excluded like a […]

Are you an insurance broker planning your 2020 marketing campaign, staffing levels and setting rates for events, cyber, caravans, excess of loss, public liability policies and more? You need to read this news, right now. […]