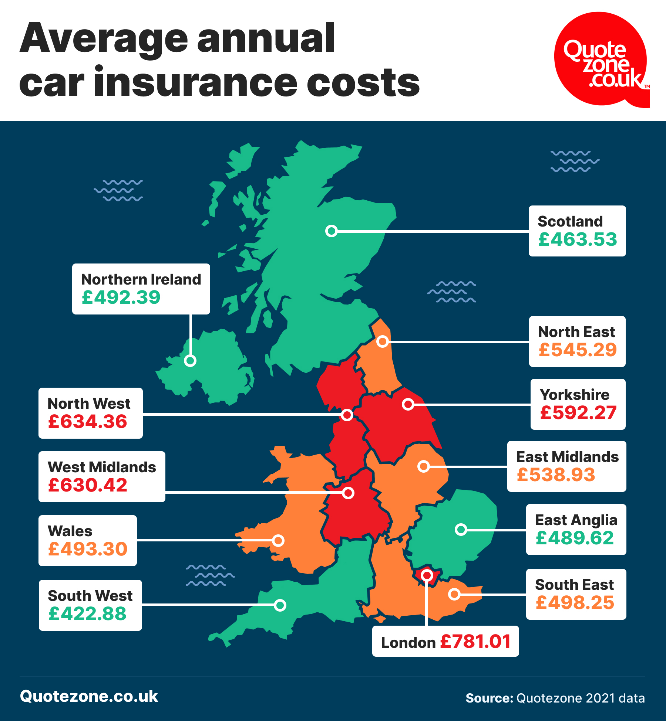 Motorists in London are forking out considerably more than drivers in other parts of the UK, with average premiums in the capital nudging close to £800. Some motorists may be tempted to move to the South West of England where average premiums are little more than half those in London at just over £400 a year.

Across the UK as a whole drivers paid an average of £548.52 for their annual motor insurance policy.

But regions comprising large rural spaces generally enjoy lower premiums than those that include large cities and urban areas where road accidents and car thefts are statistically more likely to occur.

Drivers in Scotland, Wales and Northern Ireland all paid less than the UK average at just £500 a year for their car insurance.

Conversely, motorists in regions such as the North West and West Midlands, which are largely made up of highly populated urban areas, both paid more than £630 a year on average.

As well as the likelihood of accidents and thefts, cities and densely populated urban areas generally have a younger population which is also a factor contributing to higher average car insurance premiums.

The average vehicle value can also be higher in big cities, pushing average premiums up even more, this is particularly true in the capital.

Quotezone.co.uk crunched the numbers on a sample of over 1,000,000 policies, naming London as the most expensive place in the UK to insure a vehicle, with drivers paying £781.01 on average.

There is an interesting trend emerging in UK motor premium rates. Areas of the UK which have missed out on the benefits of multi-cultural diversity are getting quoted less for their car cover. Quotezone notes that the South East of England region offers motorists good value once those living in London have been factored out, with the average premiums here being just £498.25.

Welsh drivers paid only £493.30 on average while motorists in Northern Ireland enjoyed even better value, paying just £492.39. These are both parts of the UK with less diverse populations and many miles of quieter rural roads. It will be interesting to see if the blanket 20mph speed limit actually makes any real impact on motor claims costs, or claims volumes, over the next 3-5 years.

It’s the same story in East Anglia, where drivers also enjoyed cheaper premiums at just £489.62 on average, while north of the border motorists in Scotland paid even less, at £463.53 on average. Finally, those car owners in the South West of England, including the rural counties of Devon and Cornwall, enjoyed the best value car insurance in the UK with average premiums of only £422.88. It is also likely that the average median age in rural areas is a bit higher and older drivers aged 45 are less prone to attend car meets at Tesco to practice their J-turns.

POSTCODES MATTER, BUT SO DOES OCCUPATION, LOCAL CRIME STATS ETC

Quotezone.co.uk founder Greg Wilson said: “When it comes to paying for car insurance there are huge variations depending on where in the country drivers live.

“Insurance companies are very specific and can vary the cost of a policy depending on which postcode the driver lives in but by zooming out a little we can see there are some interesting regional differences as a whole. Motorists in big cities tend to pay more and this is particularly true in London. With a greater population density, there are more cars on the road and the likelihood of a prang does increase.

“But there are also other factors at play including the local crime rate, the average age of drivers and the value of the vehicles they are insuring.

“So while the data may tempt some drivers to up sticks and move down to Cornwall, they should be warned that the cost of their premium won’t necessarily decline. There are several other factors insurance providers must consider and each premium is calculated on an individual basis for the person in question. It is essential for all motorists to accurately inform their insurance company of their home address as well as any other location where their vehicle is likely to spend more than 30 days. Failing to do so may cause their policy to be invalid if they were to make a claim.”

The data is available at Quotezone.co.uk and our comparison site can help keep insurance quotes competitive.

About alastair walker 10203 Articles
20 years experience as a journalist and magazine editor. I'm your contact for press releases, events, news and commercial opportunities at Insurance-Edge.Net
Twitter

Opinion: The Fight For Driver Data

In this opinion piece Penny Searles, CEO of Smartdriverclub, looks at the value of data from connected vehicles and how companies in the insurance sector can tap into this resource. Right now there are well […]

As the digitalisation of insurance continues to accelerate, insurers must keep pace by using technology to add value and create a more customer-centric experience. Here, Lorenz Graff, CEO and co-founder of bsurance, explores the defining […]